Enter the expression you want to expand, set the options and click the Expand button.
Help

Using letters to represent numbers is a fundamental characteristic of algebra.
In this chapter, letters will represent the numbers of arithmetic. As you become familiar with the symbols and terminology of algebra, operations on arithmetic numbers will be reviewed.

SOME SYMBOLS FOR OPERATIONS

Upon completing this section you should be able to:
1. Identify the operation symbols of arithmetic.
2. Perform these operations on whole numbers, fractions, and decimals.

Remember that when adding or subtracting fractions, you must find a common denominator.

When adding or subtracting decimals, align the decimal points. 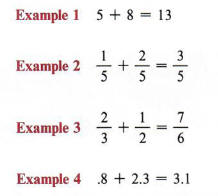 The symbol - is used to indicate the operation of subtraction, a - b (read as "a minus b") indicates the difference of the numbers a and b.

The operation of multiplication (the product of two numbers) can be represented in several ways. You should become familiar with each of these.

1. The symbol X is often used to represent multiplication, a X b (read as "a times b") represents the product of the two numbers a and b. 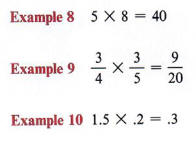 The symbol X is not usually used with letters in algebra because it can be confused with the letter X.

2. a * b (read as "a times b") is also used to represent the product of the numbers a and b.
The symbol * is not usually used with numbers because it could be confused with a decimal point.

3. If two letters or a number and a letter are written together without an operation sign, multiplication is indicated.

The process of writing two letters or a number and a letter together without an operation sign is called juxtaposition. This method of indicating multiplication cannot be used for two numbers, since 52 does not mean "5 times 2." 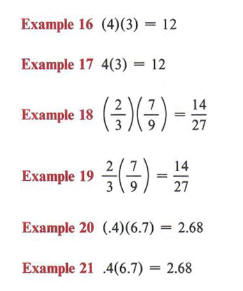 (4.2)(5.1) is a much better way to indicate the product of these two numbers than the ways shown earlier.
Recall that division is the inverse operation of multiplication. Therefore,

This information will be helpful to remember as you work the problems in the following exercise set.
Remember to reduce fractions.

Of these several methods for indicating a product, the last two are most commonly used.
The quotient of two numbers, a and b, can be written in two ways,

- both indicate "the number a is divided by the number b." 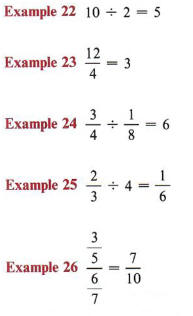 The fractional representation for division is most commonly used in algebra.

Recall from arithmetic that a fraction whose numerator is greater than the denominator is called an improper fraction.
Therefore,

Likewise, a mixed number may be written as an improper fraction. 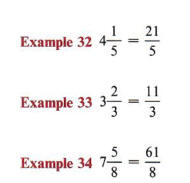 Some problems may involve only one operation, while others may require two or more.

The operation of subtraction often occurs in problems that involve making change, balancing checkbooks, and discounting prices. In preparation for later work get used to using parentheses to indicate multiplication.

Solution This is a division problem. We must divide the cost of the boat by the number of people.

We could also write this as

Remember, to change a percent to a decimal move the decimal point two places to the left

Parentheses ( ), brackets [ ], and braces j } are all used as grouping symbols in algebra. A number expression enclosed in a grouping symbol is treated as if it were a single number.

Parentheses are most commonly used when no other grouping symbols are involved.

The first step is to simplify what is inside the parentheses.

This is due to the following rule:

If an expression without grouping symbols contains only additions and subtractions, these operations are performed in order from left to right.

If an expression contains operations other than just addition and subtraction, we use the following rule: 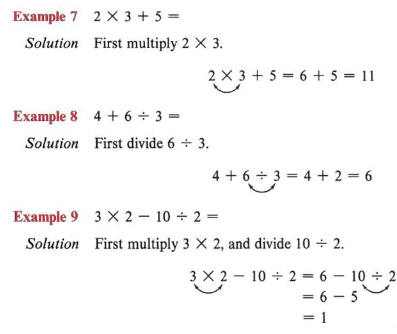 Sometimes more than one set of grouping symbols is needed in an expression. When this occurs we use brackets or braces along with parentheses for clarification. For instance, 5 + [7 - (2 + 1)] could be written using only parentheses, but 5 + (7 - (2 + 1)) is not as clear at first glance. Therefore, we alternate the symbols to avoid confusion. To evaluate such an expression, we use the following rule:

In using this rule do not try to do more than one operation at a time. 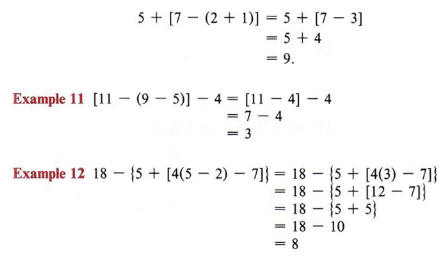 Remember that the different symbols are all used for the same purpose-to group numbers.
Again, make sure you do only one operation at a time. This is very important in order to avoid errors.
Notice that we start with (5 - 2) since it is the innermost set of symbols.

OBJECTIVES
Upon completing this section you should be able to:
1. Write literal expressions involving operations of arithmetic.
2. Identify terms and factors of an expression.

Notice again the importance of the use of the comma in example 3.

When an algebraic expression is composed of parts connected by addition or subtraction signs, these parts are called the terms of the expression.

When an algebraic expression is composed of parts to be multiplied, these parts are called the factors of the expression.

Example 7 ab has two factors, a and b.

It is very important to be able to distinguish between terms and factors. Rules  that apply to terms will not, in general, apply to factors. When naming terms  or factors, it is necessary to regard the entire expression.

From now on through all of algebra you will be using the words term and factor. Make sure you understand the definitions.

Example 8 The expression 3x + 2y + 7 has three terms. Note that a term may contain factors (for example, the first term of this expression, 3x, contains two factors)-but the entire expression is made up of terms.

It should be noted that there are more than just four factors in the expression 5xyz. The obvious factors are 5, x, y, and z. But 5x is also a factor. Other factors are 5xy, xy, 5yz, xz, 5z, and so on.

An exponent is sometimes referred to as a "power." For example, 53 could be referred to as "five to the third power."
Unless parentheses are used, the exponent only affects the factor directly preceding it.

Example 9 5xyz is one term made up of factors.

Example 10 3(a + b) is one term having two factors. Note here that the factor (a + b) has two terms, but the entire expression is made up of factors.
An exponent is a numeral used to indicate how many times a factor is to be used in a product.
An exponent is usually written as a smaller (in size) numeral slightly above and to the right of the factor affected by the exponent.

In an expression such as 5x4

Note that only the base is affected by the exponent.

Example 13 In the expression ax3

Solution 1 is the coefficient (understood), ax is the base (because of the parentheses), 3 is the exponent.
(ax)3 means (ax)(ax)(ax).

When we write a literal number such as x, it will be understood that the coefficient is one and the exponent is one. This can be very important in many operations.

If an expression has grouping symbols, the operations therein are performed first. 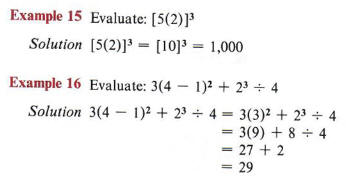 The coefficient, 1, is understood and usually we do not bother to write it in the expression.
Recall the order of operations.

OBJECTIVES
Upon completing this section you should be able to:
1. Substitute numbers for letters in literal expressions.
2. Evaluate the expression once the substitutions have been made.

The principle of substitution states that any quantity may be substituted for its equal in any process. This principle is used extensively in algebra and we will use it here to evaluate literal expressions. In this process we substitute numbers for letters and find a numerical value.

Remember that in a literal expression the letters are merely holding a place for various numbers that may be assigned to them. For that reason, these letters are sometimes called place holders or variables.

To find the perimeter of a rectangle we need to add up all four sides, but since the opposite sides are equal, we only need to double the length and double the width, and then find their sum.
The height of a triangle is called the altitude of the triangle. It is the perpendicular distance from the base to the opposite corner, which is called the vertex.

One of the most common uses of evaluating literal expressions is in working with formulas.

Example 7 The perimeter (distance around) of a rectangle is found by using the formula P = 2l + 2w, where l represents the length and w represents the width.

If the length of a rectangle is 10 and the width is 6, we may find the perimeter by substituting 10 for l and 6 for w.

If we want to find the area of a triangle where the base is 10 and the height is 8, we would let b = 10 and h = 8. Substituting these values in the formula, we obtain 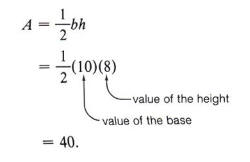 In the preceding sections we have presented symbols used in algebraic expressions. We now proceed to the operations of addition and subtraction on certain of these expressions.

Example 3 3x2y and x2y are like terms since they have the same literal
factors (x2 and y).

Example 4 3x2y2 and 2xy are not like terms. They have different literal factors. (Note that x2 and x are not the same.) 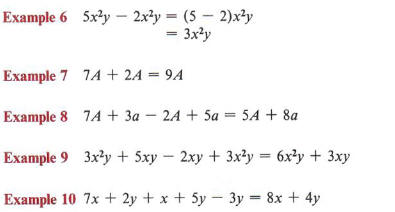 Many students make the mistake of interchanging capital and lowercase letters in an expression. In algebra a capital "A" and a lowercase "a" are considered just as different as x and y. Therefore, terms such as 5A and 3a would not be considered like terms. Be careful. Be consistent with the letters you use.

Notice that the numerical coefficient of x is 1 and in this example must be added to the 7 of lx.