In this section, you will add, subtract, multiply, and graph quadratics.

Vocabulary: The standard format of a quadratic equation is y = ax2 + bx + c; a, b, c are constants; x is the independent variable, and y is the dependent variable. Quadratics are also called second degree polynomials because the highest exponent is 2. The slope-intercept equation from the second chapter, y = mx + b is called a first degree polynomial because the highest exponent is one.

Why study quadratics? The graphs of quadratic equations result in parabolas (U shaped graphs that open up or down). This feature of quadratics makes them good models for describing the path of an object in the air or describing the profit of a company (examples of which you may see in Finite Mathematics or in Microeconomics.)

Example 1. A boy lying on his back uses a sling shot to fire a rock straight up in the air with an initial velocity (the force the boy uses to fire the rock) of 64 feet per second. The quadratic equation that models the height of the rock is

The rock is zero feet in the air at zero seconds. (This is the point right before he shoots the rock in the air.)

The rock is 48 feet in the air at one second.

Explanation: Order of operations requires that you apply exponents before multiplying.

The rock is zero feet in the air at 4 seconds; that is, the rock has hit the ground.

f. Graph the points obtained in parts a through e. 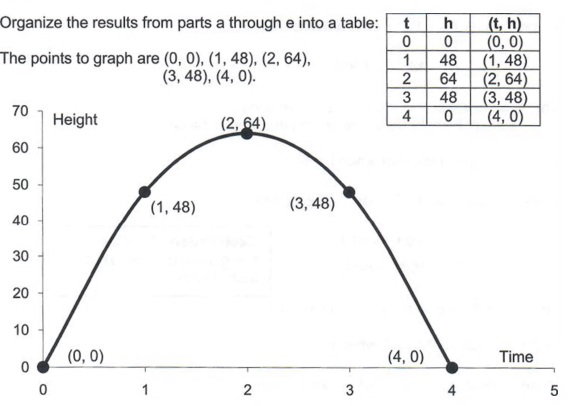 According to the graph, the rock reaches its greatest height at 2 seconds. The maximum height is 64 feet. The maximum or minimum point of a quadratic is called the vertex. You will learn how to find the vertex in Section 4.3, Quadratic Applications and Graphs.

According to the graph, the rock is on the ground at zero seconds (right before the boy shoots it) and at 4 seconds (when the rock lands). These points are the time intercepts. You will learn how to find them in the next Section 4.2, "Applications of the Quadratic Formula."

Couldn't combine the unlike terms inside the parantheses so we used the distributive property. After that, we multiplied 6x by 3 and then -5 by 3.

Example 5. The equation for profit is: Profit = Revenue - Cost

If the revenue equation for a company is:

and the cost equation is:

find the profit equation for the company.

Substituted the revenue and cost equations into the formula for profit. Must use parantheses.

Used the distributive property and multiplied the revenue equation by 1 and cost equation by -1.

Vocabulary: A binomial has two terms (just as a bicycle has two wheels).

FOIL is a simple mnemonic to remember how to multiply two binomials. 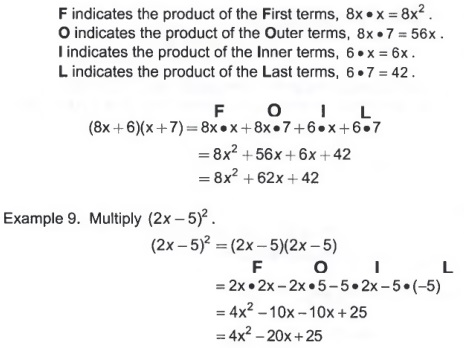 Quadratics are important equations in physics and microeconomics. The technique for adding and subtracting quadratics is the same as we have been practicing all semester; that is, add or subtract the like terms. To multiply, use the distributive property or FOIL. The vertex of the quadratic will be explained in more detail in the section, "Graphing Quadratics and Applications." The vertex is the maximum or minimum point on the graph of the quadratic.

APPLICATIONS OF THE QUADRATIC FORMULA

This section will show you how to solve quadratic equations.

, is used to solve a quadratic equation.

Study Tip: Write the quadratic equation and quadratic formula on note cards, so you can reference them when you do your homework.

Find how long it takes the rock to hit the canyon floor.

Explanation: One side of the quadratic equation must be zero.

Use the quadratic formula

T = -2.916 is a meaningless answer since t is the time it takes the rock to hit the canyon floor, and time cannot be negative.

The rock will hit the canyon floor in 8.041 seconds.

Example 2. A rancher has 500 yards of fencing to enclose two adjacent pig pens that rest against the barn. If the area of the two pens must total 20,700 square yards, what should the dimensions of the pens be?

L represents the length of both pens.

a. Use the table to find the equation for the area of the pens.

b. Simplify the equation for area. 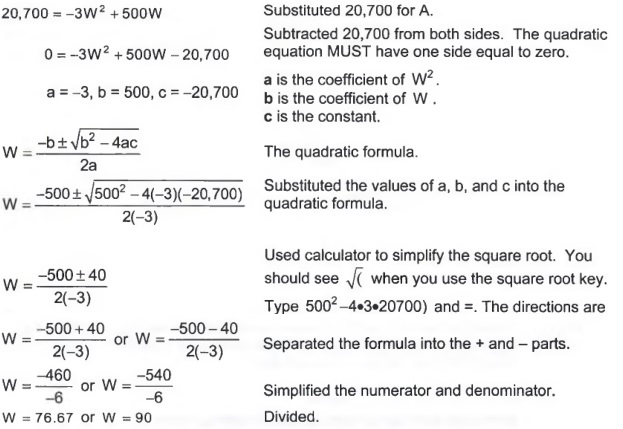 d. Find the length of the pens.

where T is measured in Celsius, and m represents the minutes that the experiment has run. Determine when the temperature of the oxygen is 0 degree Celsius. 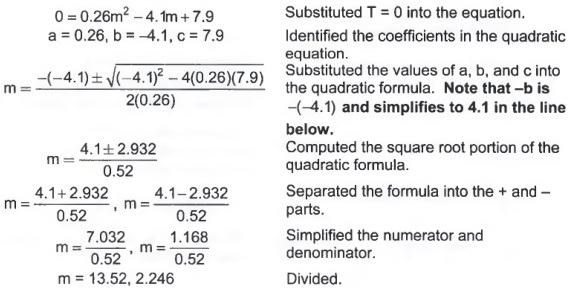 The temperature of the oxygen will be 0 degrees Celsius in 2.246 minutes and 13.52 minutes.

Study Tip: The key idea demonstrated in example 3 is how to handle a negative b in the quadratic equation.

This section shows us how to solve a new type of equation, the quadratic. These have important applications in many fields, such as business, physics, and engineering. Learn the difference between the quadratic equation and the quadratic formula.

This section explores further key points in the graph of a quadratic, the vertex and the intercepts. These points will be interpreted in applications.

Example 1. A boy lying on his back uses a sling shot to fire a rock straight up in the air with an initial velocity (the force the boy uses to shoot the rock) of 64 feet per second. The quadratic equation that models the height of the rock is

(This example comes from Section 4.1 "Introduction to Quadratics", pg 317.)

On Page 318, we generated the following values:

We used the points to obtain the graph below. The vertex and intercepts are also labeled on the graph. 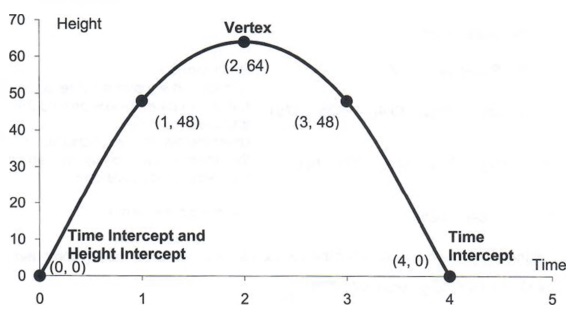 Explanation: The point (0, 0) is both the time and height intercept.

To graph a quadratic indicated by the equation, y = ax2 + bx + c, master the following terms:

Vocabulary: Vertex: The vertex is the maximum or minimum point on the graph. To find the vertex :

a. Find the x coordinate:

b. Find the y coordinate: Substitute the value for x obtained in Part a into the formula y = ax2 + bx + c.

a. Find the profit equation.

b. Find the vertex and explain what the vertex means in terms of making computer games.

The formula for the g coordinate is

c. Find the g intercepts and explain what they mean in terms of making computer games.

d. Find the P intercepts and explain what they mean in terms of making computer games.

Explanation: One explanation for the profit having two break even points is how efficient a company is at making a product. Making very few items is usually inefficient. At some point, the factory becomes very efficient at manufacturing the product, but if the factory tries to make too many items, the company becomes inefficient at producing its product.

Suppose D+++ needs to make a profit of $500,000 (P = 500) a month. Sketch this line on the graph obtained in Part b and find where the line intersects the graph of the quadratic. Write a sentence explaining what the answers mean. 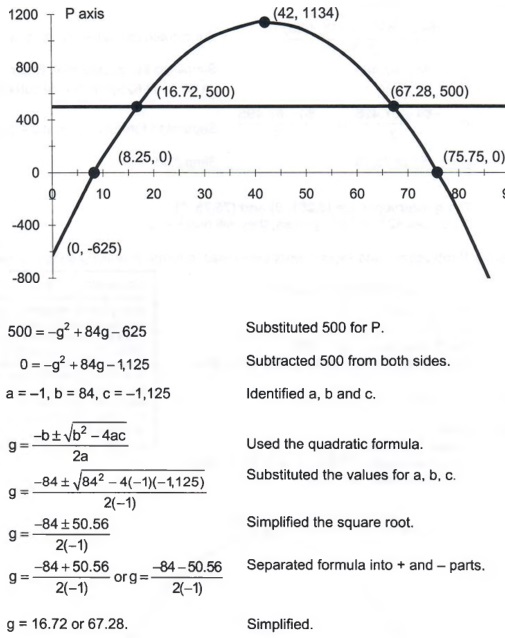 Explanation: The graph gives an estimate of where the horizontal line, P = 500, and the equation for profit, P = -g2 +84g-625 intersect. Algebra gives the exact point where they intersect.

g. Using the graph and the answers to Part c, determine how many computer games must be made and sold to guarantee a profit greater than $500,000.

The company will earn a profit of more than $500,000 when the profit graph is above the horizontal line P = 500. This problem is similar to example 2d on page 203 in Section 2.9 "Applications of Graphs".

Example 3. A kennel operator wants to enclose three adjacent dog pens of equal size against a wall. He has 96 meters of fence.

a. Find the formula for area.

Explanation: The most difficult part of the table is finding the value for length. If the farmer uses 10 meters for the width of the pens, and there are 4 widths, then he has used 4 times 10 , or 40 meters of fencing. To find how much fencing he has left for the length, subtract 40 from 96, the total amount of fencing available to the farmer.

The formula for the area of the dog pens is

b. Find the vertex and explain what it means in terms of dog pens.

The formula for the W coordinate is 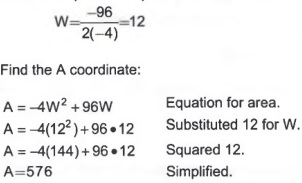 c. Find the W intercepts and explain what they mean in term of the dog pens.

d. Find the A intercept and explain what it means in terms of the dog pens.

Explanation: If the width of a rectangle is zero, then the area has to be zero. 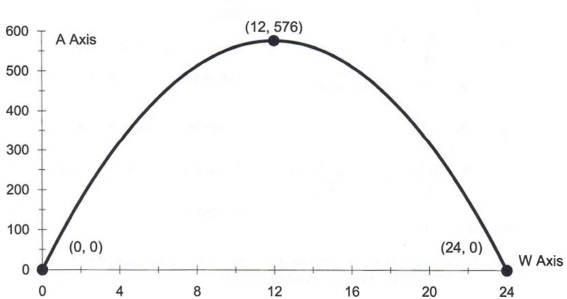 f. Suppose the total area has to be 400 square meters. Graph A = 400 and find the dimensions of the dog pens. 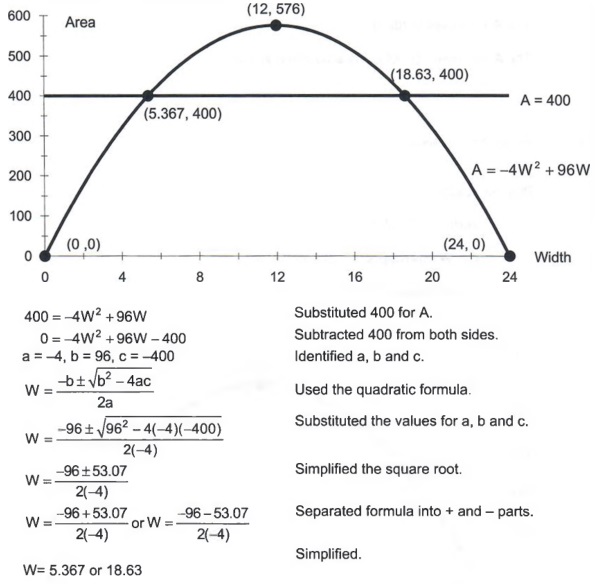 Since W, the width, is known, the length L can be found by using the formula A = LW.

Solve for L by dividing both sides by W.

where T is measured in Celsius, and m represents the minutes that the experiment has run. Graph the equation by finding the vertex and the intercepts. Label these points on the graph and explain what the vertex and intercepts mean in terms of the model.

Go Back: This is the same model that was used in Example 3 on page 332. That example was worked when the temperature was zero.

The formula for the m coordinate of the vertex is 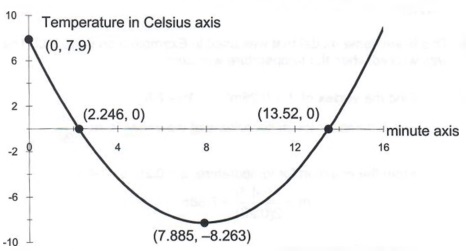 m intercepts: The temperature will be zero degrees Celsius at 2.246 and 13.52 minutes.

T intercept: The temperature was 7.9 degrees Celsius at the start of the experiment.

shaped, that is, opening down. This fact should be written on a note card.

Graphs of quadratics appear in subjects as diverse as microeconomics and physics. This section summarizes the major ideas of the unit.

Pick a value for x and substitute it into the expression.

Explanation: Less formally, an algebraic expression is factored when it has parentheses.

Vocabulary: The distributive property is a(b + c) = ab + ac. The left hand side is factored and a is the common factor.

You should be able to check by using the distributive property.

Factoring Trinomials: (A trinomial has three terms.) To factor a trinomial, recall the acronym FOIL.

Study Tip: Check your note cards for the definition of FOIL.

This is not a trinomial, but it can become one by adding 0x.

We need two numbers that when added equal 0 and when multiplied equal -64.

This example is called factoring the difference of perfect squares, and you will see this again if you take MAT 100, Intermediate Algebra.

If you multiply two quantities and the result is zero, then you know that one of the quantities must be zero. In mathematical notation 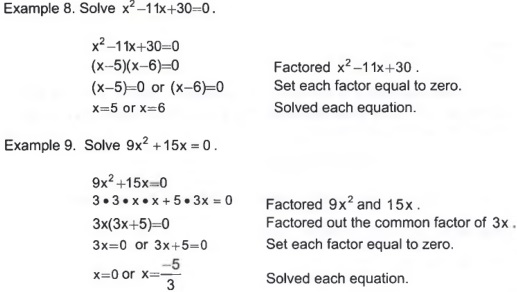 Two techniques for factoring are presented in this unit. The first is common factors which uses the distributive property, ab + ac = a(b + c). The other one is factoring trinomials. To factor trinomials, you need to know how FOIL works. If you take MAT 100, Intermediate Algebra, you will see more factoring.

This chapter introduced you to quadratics. The two major topics are the quadratic formula and graphs of quadratics. These topics have many applications in business, physics, and geometry. Factoring is an important topic in MAT 100, Intermediate Algebra. 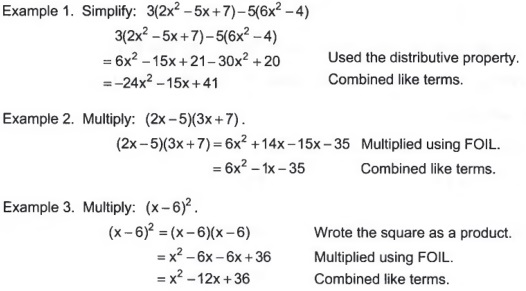 Section 4.2: Applications of the Quadratic Formula

is the quadratic formula.

Example 4. A farmer wants to enclose two adjacent chicken coops against a barn. He has 125 feet of fence. What should the dimensions be if he wants the total area to be 700 square feet.

a. Complete the table to find the equation for area. 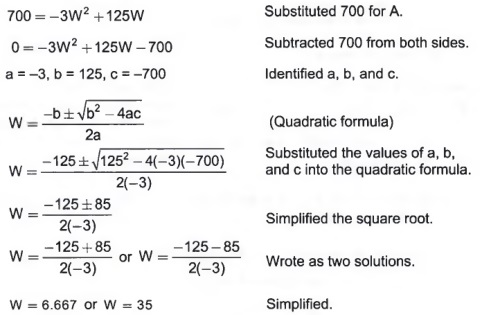 a. Find the profit equation.

b. Graph the profit equation and explain what the vertex, B, and P intercepts mean in terms of the problem. 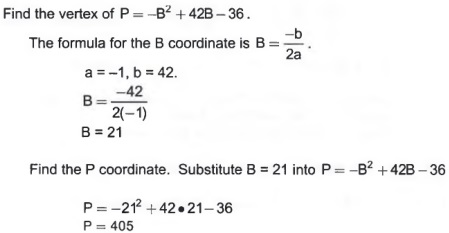 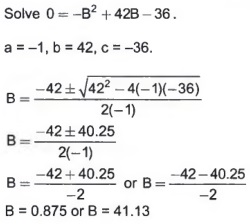 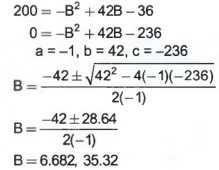 The vertex (21,405) represents the maximum profit. The company will obtain its maximum profit of $405,000 when they sell 21 million juice boxes.