Enter the polynomial inequalities you want to plot, in terms of the variables x and y, set the limits and click the Plot button.
Help

FROM WORDS TO ALGEBRA

The primary task when attempting to solve a word problem is one of translation. The problem is written in one language and must be translated into another- the language of algebra. This translation process must be precise if we are to be successful in solving the problem.

Do these two statements have the same meaning? Does the algebraic equation make the same statement as the English sentence? If so, we have correctly translated from one language to another and can easily solve for the missing number.

Before we begin to outline completed sentences or solve problems we need to review the meaning of certain phrases.

Example 2 Write an algebraic expression for: A certain number decreased by four.

If we let x represent "a certain number," and recognize that "decreased by" is subtraction, then our answer is x - 4.

If x represents "a certain number," then the expression would be 5x.

Example 4 Write an algebraic expression for: Five more than a certain numoer.

If x represents "a certain number," then "more than" means addition, the expression is x + 5.

Example 5 Write an algebraic expression for: Seven more than twice a certain number.

Again, allowing x to represent the unknown number, we have 2x + 7.

Example 6 Write an algebraic expression for: 5% of a given number.

Example 7 Write an algebraic expression for: The value in cents of d dimes.

The value of a dime is 10 cents. Therefore to indicate the value of d dimes multiply 10 by d, obtaining 10d.

When more than one unknown number is involved in a problem, we try to outline it in such a way that all unknowns are expressed in terms of one unknown.

Example 8 The Sears Tower in Chicago is eight stories taller than the Empire State Building in New York. Write algebraic expressions for the height of each building using one unknown.

From the information given we do not know how many stories either building has. We will choose one of the buildings and represent the number of stories by x.

Let x = number of stories in the Empire State Building.

Then x + 8 = number of stories in the Sears Tower.

Example 9 The length of a rectangle is three meters more than the width. Write expressions for the length and width using one unknown.

Let x = width of the rectangle.

Example 10 The width of a rectangle is one-fourth the length. Write expressions for the length and width using one unknown.

Note that if we were to let x represent the length, we would have a fraction representing the width. This certainly would not be wrong but we can avoid the use of fractions by careful selection.

Example 11 The sum of two numbers is 20. Write expressions for both numbers using one unknown.

Example 12 Express algebraically the relationship of the unknown in this sentence: A certain number is four more than a second number and is three less than a third number.

To express these three numbers algebraically first decide which will be represented by x.

For instance, if x represents the first number, we have the following:

Now suppose, in the same example, we decide to allow x to represent the second number.

In the preceding exercises we outlined relationships between unknowns within a statement. If we are to solve a problem and find the unknown numbers, there must be within the problem a sentence that yields an equation.

From example 8 in the previous section we have

x = number of stories in the Empire State Building

This time, however, we have the added statement that the total number of stories is 212.

Thus, we can write the equation

Example 2 The length of a rectangle is three meters more than the width. Find the length and width if the perimeter of the rectangle is 26 meters. 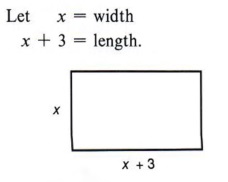 Since the perimeter is equal to the sum of twice the length and twice the width, or P = 2l + 2w, we can write the equation

Thus, the width is 5 meters and the length is 8 meters.

Example 3 he width of a rectangle is one-fourth the length. If the perimeter is 200 centimeters, find the length.

Again, the perimeter is twice the width plus twice the length. Therefore,

Example 4 The sum of two numbers is 20. Their difference is 4. Find the numbers.

Example 5 A certain number is four more than a second number and three less than a third number. Find the number if their sum is 23.

In this problem we are asked to find the numbers and are given a statement about their sum.

If we let x represent the first number, we have

The statement "their sum is 23" gives the equation

If we now solve the equation, we obtain

Leaving the answer as x = 8 would not be a solution to the problem. We are asked to "find the numbers." The answer must be

We check the problem by noting that the first number (8) is four more than the second (4) and is three less than the third (11) and that their sum is 23.

We have followed five basic steps in solving the above examples. These steps should be observed when solving any word problem.