Enter an equation or system of equations, enter the variable or variables to be solved for, set the options and click the Solve button.
Help
[one per line]
[one per line]

Often, we want to find a single ordered pair that is a solution to two different linear equations. One way to obtain such an ordered pair is by graphing the two equations on the same set of axes and determining the coordinates of the point where they intersect.

on the same set of axes and determine the ordered pair that is a solution for each equation.

Using the intercept method of graphing, we find that two ordered pairs that are solutions of x + y = 5 are

And two ordered pairs that are solutions of

The graphs of the equations are shown. 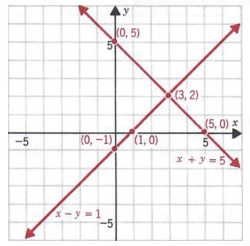 In general, graphical solutions are only approximate. We will develop methods for exact solutions in later sections.

In our work we will be primarily interested in systems that have one and only one solution and that are said to be consistent and independent. The graph of such a system is shown in the solution of Example 1.

SOLVING SYSTEMS BY ADDITION I

We can solve systems of equations algebraically. What is more, the solutions we obtain by algebraic methods are exact.

The system in the following example is the system we considered in Section 8.1 on page 335.

We can now substitute 3 for x in either Equation (1) or Equation (2) to obtain the corresponding value of y. In this case, we have selected Equation (1) and obtain

Notice that we are simply applying the addition property of equality so we can obtain an equation containing a single variable. The equation in one variable, together with either of the original equations, then forms an equivalent system whose solution is easily obtained.

In the above example, we were able to obtain an equation in one variable by adding Equations (1) and (2) because the terms +y and -y are the negatives of each other. Sometimes, it is necessary to multiply each member of one of the equations by -1 so that terms in the same variable will have opposite signs.

We begin by multiplying each member of Equation (4) by - 1, to obtain

where +b and -b are negatives of each other.

The symbol ', called "prime," indicates an equivalent equation; that is, an equation that has the same solutions as the original equation. Thus, Equation (4') is equivalent to Equation (4). Now adding Equations (3) and (4'), we get

As we saw in Section 8.2, solving a system of equations by addition depends on one of the variables in both equations having coefficients that are the negatives of each other. If this is not the case, we can find equivalent equations that do have variables with such coefficients.

Substituting 1 for x in Equation (1) yields

Note that in Equations (1) and (2), the terms involving variables are in the left-hand member and the constant term is in the right-hand member. We will refer to such arrangements as the standard form for systems. It is convenient to arrange systems in standard form before proceeding with their solution. For example, if we want to solve the system

and we can now proceed as shown above.

In Sections 8.2 and 8.3, we solved systems of first-degree equations in two vari- ables by the addition method. Another method, called the substitution method, can also be used to solve such systems.

Solving Equation (1) for y in terms of x, we obtain

Note that the substitution method is useful if we can easily express one variable in terms of the other variable.

If two variables are related by a single first-degree equation, there are infinitely many ordered pairs that are solutions of the equation. But if the two variables are related by two independent first-degree equations, there can be only one ordered pair that is a solution of both equations. Therefore, to solve problems using two variables, we must represent two independent relationships using two equations. We can often solve problems more easily by using a system of equations than by using a single equation involving one variable. We will follow the six steps outlined on page 115, with minor modifications as shown in the next example.

The sum of two numbers is 26. The larger number is 2 more than three times the smaller number. Find the numbers.

Step 3 A sketch is not applicable.

Step 5 To find the numbers, we solve the system

Since Equation (2) shows y explicitly in terms of x, we will solve the system by the substitution method. Substituting 2 + 3x for y in Equation (1), we get

Substituting 6 for x in Equation (2), we get