Enter the equations you want to plot together with the color of each plot. Then specify the variables appearing in the equations and their limits, set the options if necessary and click the Plot button.
Help

Graph of an Equation
The graph of an equation in the variables x and y consists of all points in the zy-plane whose coordinates (x, y) satisfy the equation.

Graphing by Point-Plotting
A common technique for obtaining a sketch of the graph of an equation in two vari ables is to first plot several points that lie on the graph and then connect the points with a smooth curve. This is called, naturally, point-plotting.

Since the given equation clearly shows how values of y are related to values of x, it seems reasonable to start by assigning several different numbers to x and then find the corresponding values of y to get points that lie on the graph. We then plot these points and connect them with a smooth curve. See Figure l.

Notice that the sketch doesn't show all points on the graph, but it does establish a continuing pattern. If a sketch of the graph of an equation shows enough of the graph so that the viewer is able to "see" the rest of the graph as a continuation of an established pattern, we often call the sketch complete. So, when seeking such a sketch, one approach that might be taken is to plot a sufficient number of points so that a pattern becomes evident and then connect the points by a smooth curve. However, it is not always clear how many points are sufficient. Some knowledge about the given equation and what characteristics to expect the graph of the equation to have is certainly helpful. For instance, we know that the graph of any equation of
the form y = mx +b is a straight line. Often a graphing utility can be very helpful as it has the ability to plot points very rapidly and in large quantity. For now, we will investigate some properties of the graph of an equation that can be obtained from an algebraic analysis of the equation. Later, we will return to the idea of using a graphing utility to obtain a sketch of the graph of an equation. 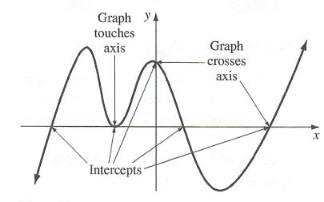 Finding Intercepts - Identify the x- and y-intercepts for the graph given in Figure 3. 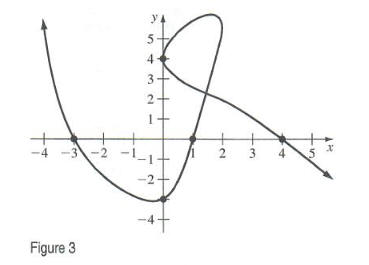