The language of mathematics is particularly effective in representing relationships between two or more variables. As an example, let us consider the distance traveled in a certain length of time by a car moving at a constant speed of 40 miles per hour. We can represent this relationship by

We have already used word sentences and equations to describe such relationships; in this chapter, we will deal with tabular and graphical representations.

The equation d = 40f pairs a distance d for each time t. For example,

The pair of numbers 1 and 40, considered together, is called a solution of the equation d = 40r because when we substitute 1 for t and 40 for d in the equation, we get a true statement. If we agree to refer to the paired numbers in a specified order in which the first number refers to time and the second number refers to distance, we can abbreviate the above solutions as (1, 40), (2, 80), (3, 120), and so on. We call such pairs of numbers ordered pairs, and we refer to the first and second numbers in the pairs as components. With this agreement, solutions of the equation d - 40t are ordered pairs (t, d) whose components satisfy the equation. Some ordered pairs for t equal to 0, 1, 2, 3, 4, and 5 are

Such pairings are sometimes shown in one of the following tabular forms.

by substituting a particular value of one variable into Equation (1) and solving for the other variable.

or in the tabular forms

For example, in Equation (2) above,

We get the same pairings that we obtained using Equation (1)

We obtained Equation (2) by adding the same quantity, -2x, to each member of Equation (1), in that way getting y by itself. In general, we can write equivalent equations in two variables by using the properties we introduced in Chapter 3, where we solved first-degree equations in one variable.

Equations are equivalent if:

Solution
First, adding 3x to each member we get

Now, dividing each member by 2, we obtain

In this form, we obtain values of y for given values of x as follows:

Sometimes, we use a special notation to name the second component of an ordered pair that is paired with a specified first component. The symbol f(x), which is often used to name an algebraic expression in the variable x, can also be used to denote the value of the expression for specific values of x. For example, if

The symbol f(x) is commonly referred to as function notation.

In Section 1.1, we saw that every number corresponds to a point in a line. Simi- larly, every ordered pair of numbers (x, y) corresponds to a point in a plane. To graph an ordered pair of numbers, we begin by constructing a pair of perpendicular number lines, called axes. The horizontal axis is called the x-axis, the vertical axis is called the y-axis, and their point of intersection is called the origin. These axes divide the plane into four quadrants, as shown in Figure 7.1. 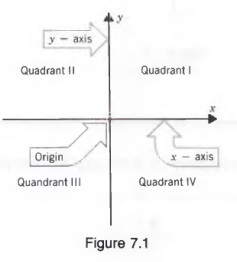 Now we can assign an ordered pair of numbers to a point in the plane by referring to the perpendicular distance of the point from each of the axes. If the first component is positive, the point lies to the right of the vertical axis; if negative, it lies to the left. If the second component is positive, the point lies above the horizontal axis; if negative, it lies below. 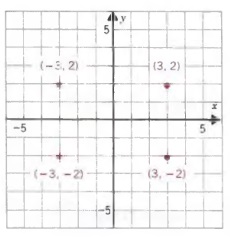 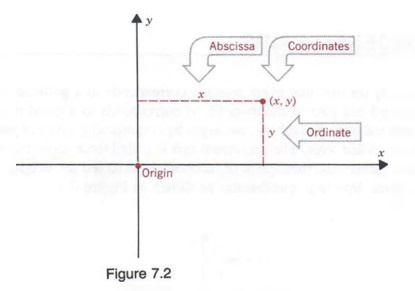 and we obtain the solutions

which can be displayed in a tabular form as shown below. 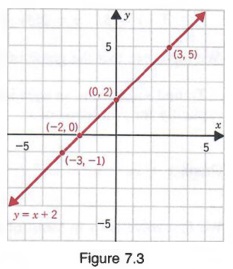 The graphs of first-degree equations in two variables are always straight lines; therefore, such equations are also referred to as linear equations.

In the above example, the values we used for x were chosen at random; we could have used any values of x to find solutions to the equation. The graphs of any other ordered pairs that are solutions of the equation would also be on the line shown in Figure 7.3. In fact, each linear equation in two variables has an infinite number of solutions whose graph lies on a line. However, we only need to find two solutions because only two points are necessary to determine a straight line. A third point can be obtained as a check.

To graph a first-degree equation: 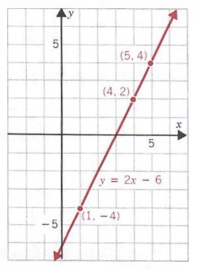 We now select any two values of x to find the associated values of y. We will use 2 and 0 for x.

Next, we graph these ordered pairs and pass a straight line through the points, as shown in the figure.

Any third ordered pair that satisfies the equation can be used as a check: 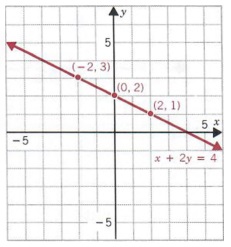 The equation y = 2 can be written as

and can be considered a linear equation in two variables where the coefficient of x is 0. Some solutions of 0x + y = 2 are

In fact, any ordered pair of the form (x, 2) is a solution of (1). Graphing the solutions yields a horizontal line as shown in Figure 7.4. 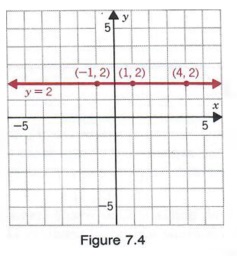 Similarly, an equation such as x = -3 can be written as

and can be considered a linear equation in two variables where the coefficient of y is 0. 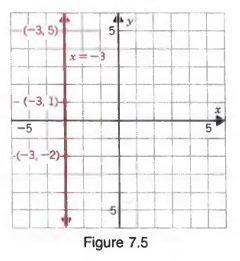 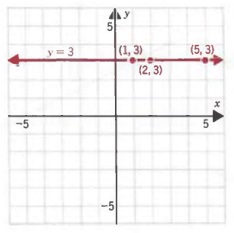 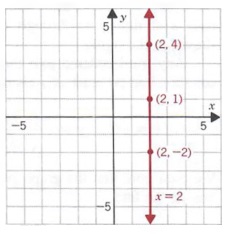 In Section 7.3, we assigned values to x in equations in two variables to find the corresponding values of y. The solutions of an equation in two variables that are generally easiest to find are those in which either the first or second component is 0. For example, if we substitute 0 for x in the equation

Thus, a solution of Equation (1) is (0, 3). We can also find ordered pairs that are solutions of equations in two variables by assigning values to y and determining the corresponding values of x. In particular, if we substitute 0 for y in Equation (1), we get 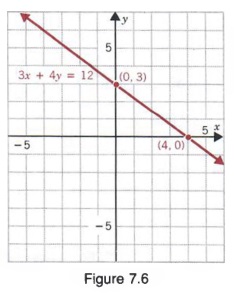 Now, we find the y-intercept by substituting for x in the equation to get

The ordered pairs (3, 0) and (0, -6) are solutions of 2x - y = 6. Graphing these points and connecting them with a straight line give us the graph of 2x - y = 6. If the graph intersects the axes at or near the origin, the intercept method is not satisfactory. We must then graph an ordered pair that is a solution of the equation and whose graph is not the origin or is not too close to the origin. 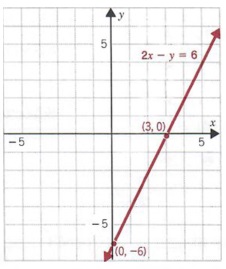 Since one point is not sufficient to graphy = 3x, we resort to the methods outlined in Section 7.3. Choosing any other value for x,say 2, we get 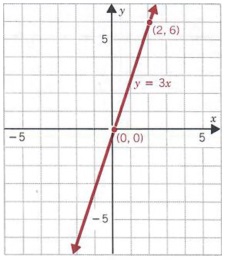 In this section, we will study an important property of a line. We will assign a number to a line, which we call slope, that will give us a measure of the "steepness" or "direction" of the line.

It is often convenient to use a special notation to distinguish between the rectan- gular coordinates of two different points. We can designate one pair of coordinates by (x1, y1 (read "x sub one, y sub one"), associated with a point P1, and a second pair of coordinates by (x2, y2), associated with a second point P2, as shown in Figure 7.7. Note in Figure 7.7 that when going from P1 to P2, the vertical change (or vertical distance) between the two points is y2 - y1 and the horizontal change (or horizontal distance) is x2 - x1. 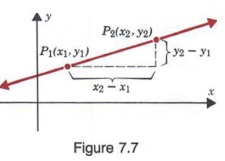 The ratio of the vertical change to the horizontal change is called the slope of the line containing the points P1 and P2. This ratio is usually designated by m. Thus,

Find the slope of the line containing the two points with coordinates (-4, 2) and (3, 5) as shown in the figure at the right. 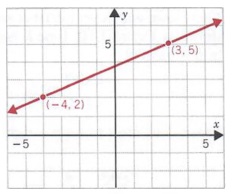 Also note (Figure 7.8c) that since all points on a vertical have the same x value, x2 - x1 equals zero for any two points. However,

is undefined, so that a vertical line does not have a slope.

These lines meet to form a right angle and are called perpendicular lines.

In general, if two lines have slopes and m2:

In Section 7.5, we found the slope of a straight line by using the formula

In general let us say we know a line passes through a point P1(x1, y1 and has slope m. If we denote any other point on the line as P(x, y) (see Figure 7.11 b), by the slope formula

Equation (2) is called the point-slope form for a linear equation. In Equation (2), m, x1 and y1 are known and x and y are variables that represent the coordinates of any point on the line. Thus, whenever we know the slope of a line and a point on the line, we can find the equation of the line by using Equation (2).

Now consider the equation of a line with slope m and y-intercept b as shown in Figure 7.12. Substituting 0 for x1 and b for y1 in the point-slope form of a linear equation, we have 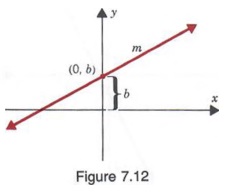 Equation (3) is called the slope-intercept form for a linear equation. The slope and y-intercept can be obtained directly from an equation in this form.

Example 2 If a line has the equation

then the slope of the line must be -2 and the y-intercept must be 8. Similarly, the graph of

If an equation is not written in x = mx + b form and we want to know the slope and/or the y-intercept, we rewrite the equation by solving for y in terms of x.

Solution
We first solve for y in terms of x by adding -2x to each member.

Now dividing each member by -3, we have

Comparing this equation with the form y = mx + b, we note that the slope m (the coefficient of x) equals 2/3, and the y-intercept equals -2.

Such a relationship is called a direct variation. We say that the variable y varies directly as x.

We know that the pressure P in a liquid varies directly as the depth d below the surface of the liquid. We can state this relationship in symbols as

In the above example, we can solve for the constant k to obtain

Since the ratio P/d is constant for each set of conditions, we can use a proportion to solve problems involving direct variation.

Solution
Since the ratio P/d is constant, we can substitute values for P and d and obtain the proportion 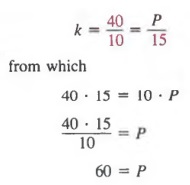 Determine if the given ordered pair is a solution of y = -x + 6.

which is a false statement.

In general, to graph a first-degree inequality in two variables of the form Ax + By = C or Ax + By = C, we first graph the equation Ax + By = C and then determine which half-plane (a region above or below the line) contains the solutions. We then shade this half-plane. We can always determine which half- plane to shade by selecting a point (not on the line of the equation Ax + By = C) and testing to see if the ordered pair associated with the point is a solution of the given inequality. If so, we shade the half-plane containing the test point; otherwise, we shade the other half-plane. Often, (0, 0) is a convenient test point.

is false, (0, 0) is not a solution and we shade the half-plane that does not contain the origin (see graph b).

Solution
We begin by graphing the line y = 2x (see graph a). Since the line passes through the origin, we must choose another point not on the line as our test point. We will use (0, 1). Since the statement