In this chapter we wish to introduce the set of signed numbers or directed numbers and establish the four basic operations on this set. The remainder of your study of algebra will involve this new set of numbers.

THE MEANING OF SIGNED NUMBERS

We can represent the numbers of arithmetic on a number line. We start by placing zero at a point on the line. We then agree that we will place numbers at other points on the line such that a larger number is to the right and that all units (0 to 1, 4 to 5,10 to 11, and so on) will be of equal length. This line is illustrated below.

We now wish to extend our thinking to include numbers to the left of zero. Such numbers are called negative numbers and are written with a minus sign preceding them. Numbers such as -6, -1, and -10 are read as "negative six," "negative one," and "negative ten."

The set of numbers that can be expressed as the ratio of two integers is called the set of rational numbers. Fractions, such as

These positive and negative numbers are referred to as signed numbers or directed numbers.

Example 2 Jack had a bank balance of $23 and wrote a check for $30. Represent his balance with a signed number.

Since he spent seven dollars more than he had, his balance is $ - 7 and the banker is probably not too happy.

The distance from any number to zero on the number line is defined to be the absolute value of that number.

Notice that the absolute value of a number is always positive or zero.

In chapter 1 you learned that parentheses are used as grouping symbols. If we enclose a number expression in parentheses and place a minus sign before it, we are indicating the "negative" of the entire expression within the parentheses.

Let us now restate the rule in more general terms.

Example 1 If you start at a point and move six steps north then move three more steps north, where will you be in relation to your starting point?

If a fall in temperature is represented by a minus sign, then a fall of 3 degrees followed by a fall of 7 degrees can be written as

Using the number line and starting at zero, first move three units to the right.

Then move six units to the left.

Then move four units to the right.

Example 8 After losing nine yards on the first down, the Browns completed a pass for a twelve-yard gain on the second down. What was the total gain or loss?

Upon completing this section you should be able touse the rules for combining signed numbers.

In the preceding section we used the meaning of a signed number and the number line to work problems combining signed numbers. We are now ready to establish rules for performing this operation.

First we make the following observations from the discussion and examples of the preceding section.

1. A sign (plus or minus) affects only the number expression to its right.

3. We combine numbers only two at a time.

Observation 3 makes it clear that we only need rules for combining two signed numbers.

Note again that rules for combining signed numbers apply to only two numbers at a time. If an expression contains several numbers, we must apply the rules more than once. 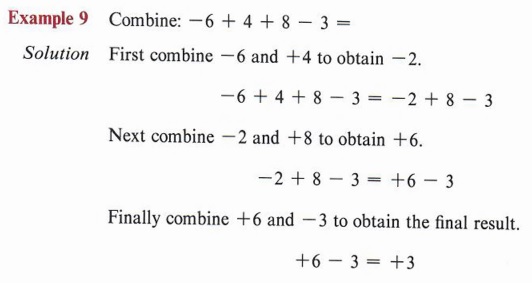 Since the order of combining numbers will not change the answer (commutative property), we can, in example 9, proceed in a different way. 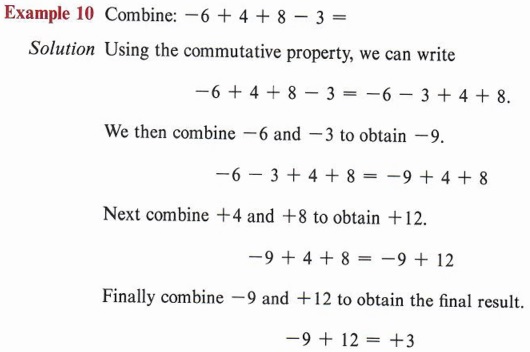 Both of these approaches should be practiced so that you can choose whichever method is easier for a particular problem.

Note in this last example that this order gives easier combinations than combining left to right. The choice of order is left to the student, since the answer will be the same either way. 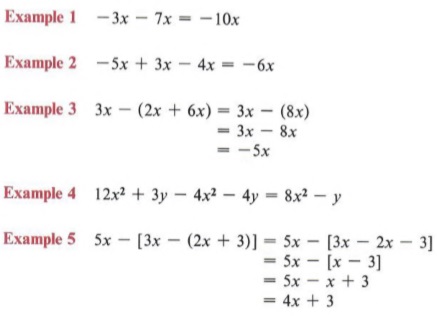 A WORD ABOUT SUBTRACTION

The following definition should make it clear that both statements are really the same.

Subtraction is adding the negative. In symbols
a - b = a + (-b).
(b subtracted from a is the same as the negative of b added to a.) 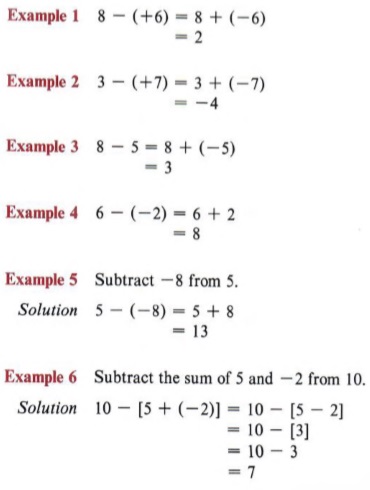 MULTIPLICATION AND DIVISION OF SIGNED NUMBERS

Applying this same technique to signed numbers will lead to one of the rules for their multiplication.

From arithmetic we know the following rule.

The product of two positive numbers is positive.

In each of these rules be careful to note that the word "two" is very important. Since we can only multiply two numbers at a time, we only need rules for two numbers.

There are several ways this could be done. We could first multiply (3)( - 2) obtaining 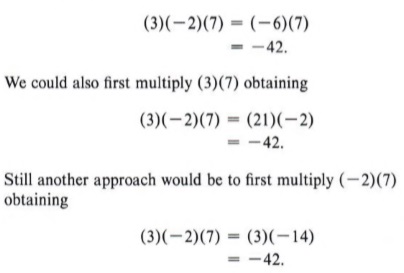 It should be clear that the order in which the numbers are multiplied does not matter. The result will be the same.

If we use the distributive property, we have

We now wish to establish a rule for multiplying two negative numbers.

However, if we first use the distributive property, we obtain

The choice of numbers in this discussion would not change the conclusion. Hence we have the following rule:

The product of two negative numbers is positive. 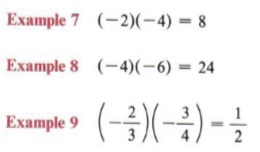 Once more we must realize the importance of the word "two." This rule, as all others, must be applied to only two numbers at a time. 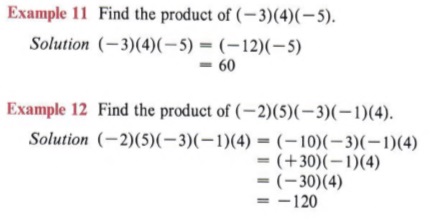 Division is defined as "multiplying by the inverse." The multiplicative inverse of a number is sometimes referred to as the reciprocal of the number.

In a problem such as 12 divided by 6, we are dividing by 6. Using the definition, the problem is the same as multiplying by the multiplicative inverse (or reciprocal) of 6, which is 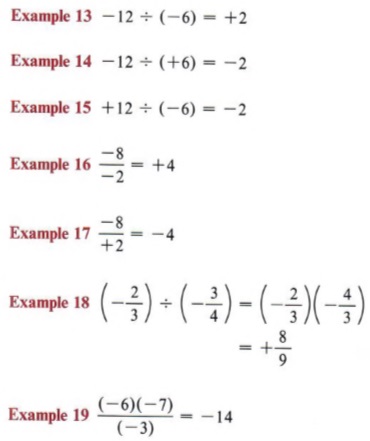 We have used grouping symbols in several situations in the preceding chapters. Now that we have discussed the distributive property and the operations on signed numbers, we can extend our ability to remove grouping symbols. 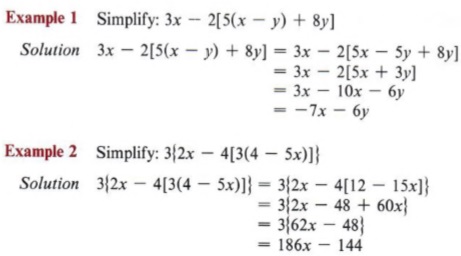 In chapter 1 we evaluated literal expressions using only the numbers of arithmetic. We now are able to evaluate expressions that involve signed numbers. 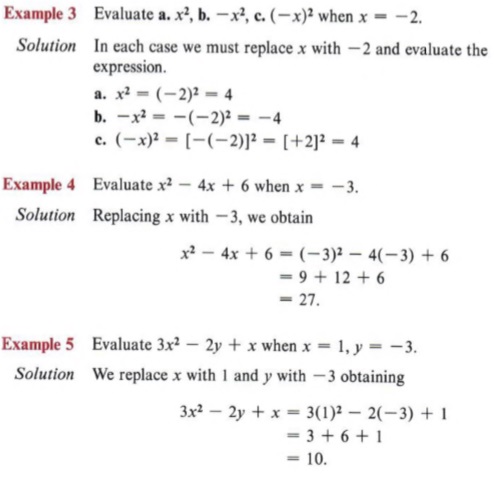