Enter a polynomial inequality or system of inequalities, enter the variable to be solved for, set the options and click the Solve button.
Help
[one per line]

At first glance these may seem to be three different problems. However, closer examination shows that they are actually the same. For all three a possible outline is

Problems such as these are classified as number relation problems. If you recognize a problem in this class, then the outline for solving it must show a relation between the numbers. The equation will then be based on a statement about the sum, difference, and so on.

The problems you solved in the last section were all number relation problems. They all involved comparing two or more numbers. 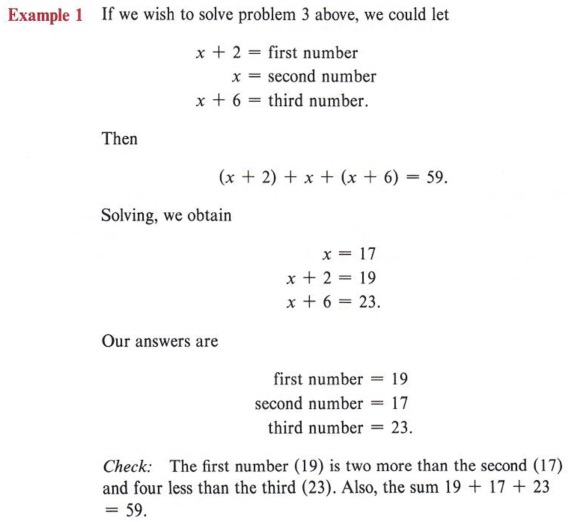 Problems comparing age, height, weight, and so forth are number relation problems. 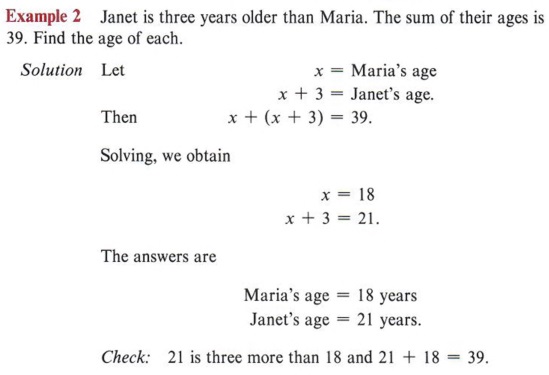 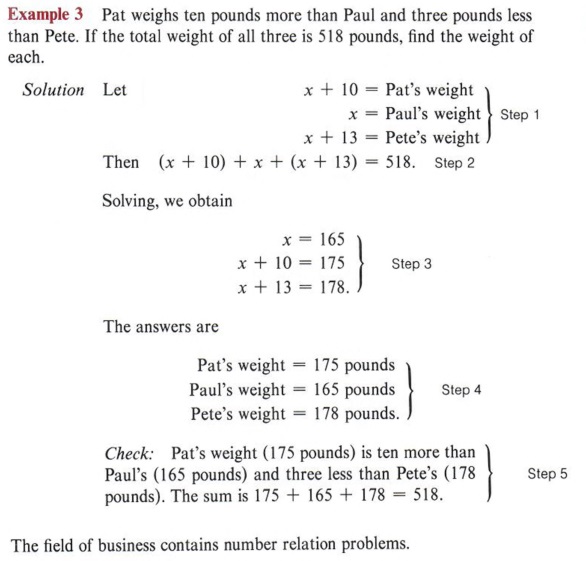 Example 4 A customer purchases a stereo radio for $306.80, including a 4% sales tax. Find the price of the radio and the amount of sales tax.

Then the total sale is the sum of the price of the radio and the sales tax.

Solving the equation, we obtain

Some number relation problems require prior knowledge of a formula to set up the equation.

Notice that to solve the problem, you must know that P = 2l + 2w is the formula for the perimeter of a rectangle. We outline this as

Notice that we used subscripts o and n to distinguish the original perimeter from the new perimeter. The equation comes from the statement that

Since x represents the width, we have 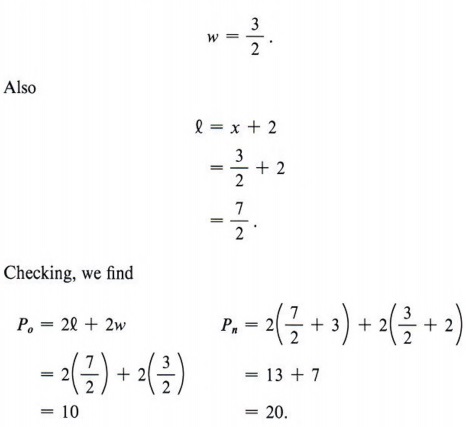 Thus, the perimeter of the new rectangle is twice that of the original rectangle, and the answer checks.

The interest earned at 6% is

The equation representing the total interest is

Example 7 The interest due on a two-year $300 loan amounted to $90. What annual rate of interest was charged?

Another formula often found in verbal problems is

which is the distance formula for constant rate. Given the rate at which an object is moving and the time that it moves at this rate, we can find the distance the object moves.

Example 1 A car travels at the rate of 55 mph for four hours. How far does it travel?

Thus, the distance traveled is 220 miles.

If the distance and rate are both given, we can find the time.

It will therefore take four hours to travel the distance.

We can also solve for the rate if we are given the distance and time.

Example 3 A person walked 21 miles in

hours. What was the person's average rate?

The person's average rate was six miles per hour.

One type of distance problem involves two objects leaving from the same point and traveling in the same direction.

We outline as follows:

In this table x represents the time the sheriff takes to catch the robber. Notice that the distance 120(x + 2) and 200x come from the formula d = rt.

The equation comes from the fact that the sheriff and the robber will have traveled the same distance when the sheriff catches the robber. Thus,

The sheriff will catch the robber in three hours.

Another type of distance problem involves two objects leaving from the same point and traveling in opposite directions.

Example 5 Pamela and Sue start at the same point and walk in opposite directions. The rate at which they are moving away from one another is 11 mph. At the end of three hours Pamela stops and Sue continues to walk for another hour. At the end of that time Pamela has walked twice as far as Sue. How far apart are they?

We use the following table:

Thus, they are 36 miles apart.

Still another type of distance problem involves two objects that leave from two different points and travel toward each other.

Example 6 Juan and Steven started 36 miles apart and walked toward each other, meeting in three hours. If Juan walked two miles per hour faster than Steven, find the rate of each.

First set up the following table:

The total distance they have traveled is 36 miles. Thus,

In working the problem we assume that the rate of the stream will increase or decrease the rate of the boat by two kilometers per hour. Since x represents Mike's speed in still water, we obtain

Notice that x is not the solution to the problem but is Mike's rate of rowing in still water. However, the question asked is "What is the distance from the lodge to the park?" To answer this use either the distance upstream or downstream since they are the same. Using the upstream distance, we have 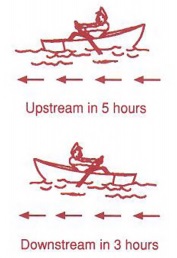 The final type of problem we will discuss in this chapter is the mixture problem. Mixture problems come in various settings. They may involve mixing candy, coffee, coins, liquids, and so on. They all have a central concept however, which helps in solving them.

Example 1 A merchant has one brand of coffee that sells for $1.80 per pound and a second brand that sells for $2.20 per pound. The merchant wishes to make a blend of the two coffees. How many pounds of each price coffee must be used to make 20 pounds of a mixture that would sell for $ 1.90 per pound?

We set up the following table from the information given in the problem.

Looking at the "total value" column of the table, notice that the sum of the total values of the two brands must equal the total value of the mixture. This fact gives us the equation

From the given information we set up the following table:

We may outline as follows:

Notice that the equation must come from the value column. Any equation must have like quantities on each side. You can never equate pounds with value, number of coins with the dollar value of the coins, and so forth. 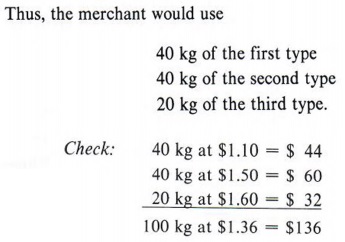 Example 4 How much pure alcohol must be added to nine quarts of water to obtain a mixture of 40% alcohol?

We set up the table.

Notice that the amount of alcohol in the mixture will be equal to the amount added. We can therefore write the equation

Therefore, six quarts of alcohol must be added.