INEQUALITIES IN ONE VARIABLE

≥ means "is greater than or equal to."

Statements that involve any of the above symbols are called inequalities. Inequalities such as

are said to be of the same order or same sense because the left-hand member is less than the right-hand member in each case. Inequalities such as

1. If the same expression is added to or subtracted from each member of an inequality, the result is an equivalent inequality in the same order.

2. If each member of an inequality is multiplied or divided by the same positive number, the result is an equivalent Inequality in the same order.

3. If each member of an inequality is multiplied or divided by the same negative number, the result is an equivalent inequality in the opposite order.

The three properties above also apply to inequalities of the form a > b, as well as a < b.

Now let us see how the three properties can help us solve inequalities.

, where x is an integer.

Solution Multiplying each member by 2 (a positive number), we have

Then dividing each member by 3, we get

The graph of this inequality is

In the above example, all the inequalities were in the same order because we only applied Property 2 above. Now consider the following inequality.

Solution Adding - 1 to each member, we get

Now we apply Property 3 and divide each member by -3. In this case we have to reverse the order of the inequality. 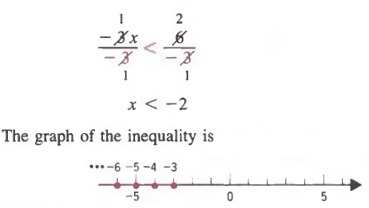 When solving word problems involving inequalities, we follow the six steps outlined on page 115 except the word equation will be replaced by the word inequality.

Most problems that deal with practical applications of mathematics are expressed in words. Before we can solve such problems, we must translate word sentences into mathematical equations. We can then use the techniques of the previous sections to solve the equations.

In this section, we will only be concerned with writing algebraic expressions and equations. In the following sections, we will actually solve equations.

In Sections 1.2 and 1.3 we associated certain word phrases with certain mathematical operations:

We can translate these word phrases into algebraic expressions as shown in the following examples. 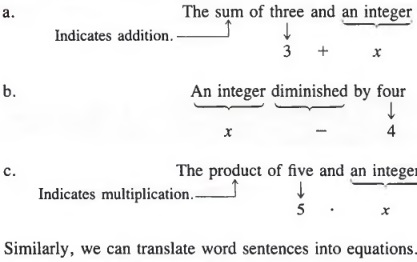 Similarly, we can translate word sentences into equations. 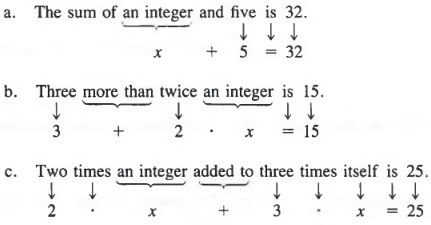 Common Errors: When translating a phrase such as "a subtracted from b," the order is important. We must write

since a is subtracted from b. For example, to translate

"If seven is subtracted from 4 times an integer, the result is 17,"

we represent the integer by a symbol, say x, and then write the sentence as follows.

In the last section we translated word sentences into equations. Now, we will solve a variety of word problems. The following steps are suggested.

To solve a word problem:

In practice, we usually combine steps 1 and 2.

Follow the six steps listed above to solve the following word problem.

The sum of a certain number and 9 is equal to four times the number. What is the number?

Steps 1-2 We first write what we want to find (a number) as a word phrase. Then, we use a variable to represent this number.

Step 3 A sketch is not applicable in this problem.

Step 4 We write an equation relating the known and unknown quantities.

The sum of two consecutive odd integers is 12. What are the integers?

Steps 1-2 We first write what we want to find (the integers) as two word phrases.

Then, we use a variable to represent the integers. The smaller odd integer: x

The next consecutive odd integer: x + 2

Step 3 A sketch is not applicable in this problem.

Step 4 Next, we write an equation relating known and unknown quantities.

In the following example, a sketch is helpful.

A board 186 centimeters long is cut into two pieces so that one piece is twice as long as the other. How long is each of the two pieces?

Solution Steps 1-2 We first write what we want to find (the lengths) as word phrases. Then, we use a variable to represent the lengths.

Step 3 We now make a sketch and label dimensions.

Step 5 We now solve the equation.