To see your tutorial, please scroll down

If a is any real number, then a^1=a,a^2=aa, a^3=aaa and, in general, if n is any positive integer, the symbol a^n is deﬁned by the equation

In the symbol a^n,a is called Hie base and n is called the exponent. The term a^2 is read “a square,” a^3 is read “a cubed,” a^4 is read "a to the fourth power," and in general a^n is read “a to the nth power.”
A variable is a letter that takes on dmerent values from a given collection of real numbers during a given discussion. A constant is a symbol or letter that stands for just one particular real number during the discussion, even if we do not specify which real number it stands for. It is an agreed custom to use the ﬁrst letters of the alphabet, such as a, b, c, d, ... , for constants and the latter letters of the alphabet. such as x, y, z, u, v, ..., for variables. Since there are only a ﬁnite number of letters in the alphabet we are sometimes forced to use subscripts on a single letter to distinguish between different constants. For example, a_0 is read “a-sub-nought" or “a-sub-zero," a, is read "a- sub-one,” and, in general, for n a positive integer a_n, is read “a-sub-n.” We certainly must not confuse subscripts with exponents.

Consequently the degree of the polynomial in x is 3, the degree in y is 4, and its degree is 5, as indicated in the table above.

then the polynomial is of degree n, has leading coefficient a_n, and constant term a_0.

Example 2. What is the degree, leading coefficient, and constant term of each of the following?

2.2  Addition and Subtraction of Polynomials

Since polynomials are expressions in one or more variables over the real numbers, the laws that we discussed in Chapter 1 may be used to develop techniques for adding, subtracting, multiplying, and dividing them.

The addition of two expressions, such as 2a and 4a, may be accomplished by a direct application of the distributive law. Thus,

An expression of the form 2x + 3y cannot be put in any simpler form since in general x and y will denote two different quantities. We can, however, add two or more expressions of this kind in the following way.

In practice, when several expressions are to be added, the following method is sometimes helpful.

We write the expressions directly underneath one another in such a way that the terms containing the same letters appear in the same column as follows:

The bottom line is the ﬁnal result, which is obtained by adding the respective columns.

We have already seen (Chapter 1) that subtraction of signed numbers may be accomplished by addition after changing the sign of the number to be subtracted. This is exactly what we do when we subtract polynomials.

We handle grouping with parentheses the same way that we handled it with signed numbers in Section 1.2.

Let’s see how our Polynomials solver simplifies this and similar problems. Click on "Solve Similar" button to see more examples.

Rewrite the expression x-2y+ z-5 with the last three terms enclosed in parentheses preceded by a minus sign.

When multiplying monomials in which the variable x appears, we obtain products of the form x^(m)x^(n). The total number of factors of x in this product is m + n, so that we have the following law of exponents:

In order to multiply two or more algebraic expressions together we must make use of the above law as well as the laws of real numbers from Chapter 1.

In particular we make use of the distributive laws when we multiply two multinomials, as is illustrated in the following examples.

From Example 3 we see that the terms in the product of one polynomial by another are obtained by multiplying each term in the ﬁrst factor by each term in the second. With a little experience we will be able to skip the steps that use the distributive laws, simply writing down all the products. This is illustrated in the next two examples.

Let’s see how our polynomial solver Multiplies this and similar problems. Click on "Solve Similar" button to see more examples.

We use the notation of long division, which is what we will ﬁnd convenient for dividing one polynomial by another.

The next example recalls the method of long division for integers.

This gives us the equality

Step 1.  Arrange both polynomials in descending powers of x, and write as follows. 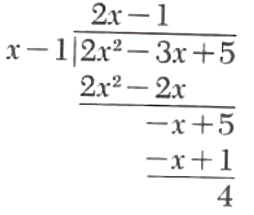 The remainder, 4, has degree 0, and Hie divisor, x- 1, has degree 1 Therefore, the division terminates.

Step 6.  The result of this division is presented by the equation

which in this example is 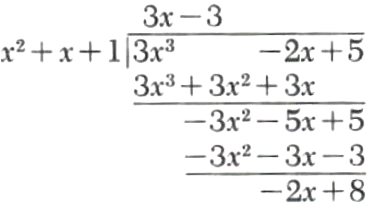 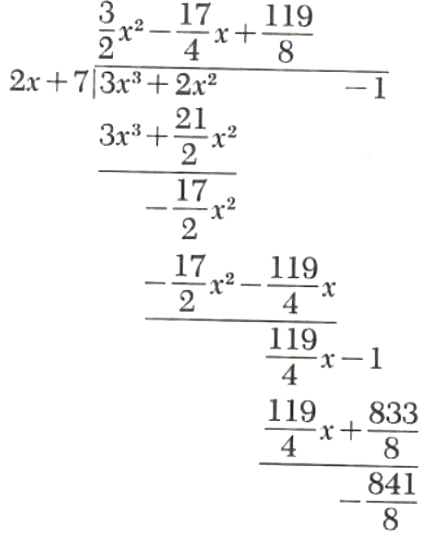 To perform this division we treat these polynomials as polynomials in the single variable x. 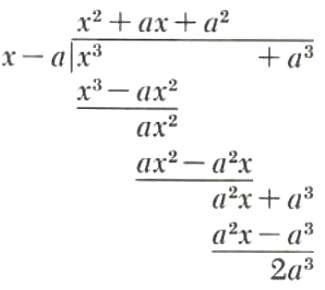