To see your tutorial, please scroll down

Linear relations and their graphing

In this section we examine one of the simplest types of relations, the linear relation. Every linear relation has a graph that is a straight line, and so we need only find two points on the graph in order to sketch it. Examples of linear relations arey=2x+3 , y=x and 3x + 2y = 6

y=ax+b,
where a and b are real numbers.

Note   Linear relations are often written in the form Ax + By = C , where A, B, and C are real, and A and B are not both 0. This is called the standard form of a linear relation.

In the equation Ax + By = C, any number can be used for x or y, so both the domain and range of a linear relation in which neither Anor B is 0are the set of real numbers (-inf,inf),

GRAPHING LINEAR RELATIONS.  The graph of a linear relation can be found by plotting at least two points. Two points that are especially useful for sketching the graph of a line are found with the intercepts. An x-intercept is an x-value at which a graph crosses the x-axis. A y-intercept is a y-value at which a graph crosses the y-axis. Since y = 0 on the x-axis, an x-intercept is found by setting y equal to 0 in the equation and solving for x. Similarly, a y-intercept is found by settingx=0 in the equation and solving for y. 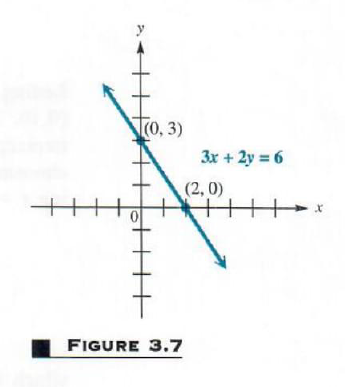 Let’s see how our math solver generates graphs of this and similar problems. Click on "Solve Similar" button to see more examples.

Since y always equals -3, the value of y can never be 0. This means that the graph has no x-intercept. The only way a straight line can have no x-intercept is for it to be parallel to the x-axis, as shown in Figure 3.8. Notice that the domain of this linear relation is (-inf,inf) but the range is {-3}. 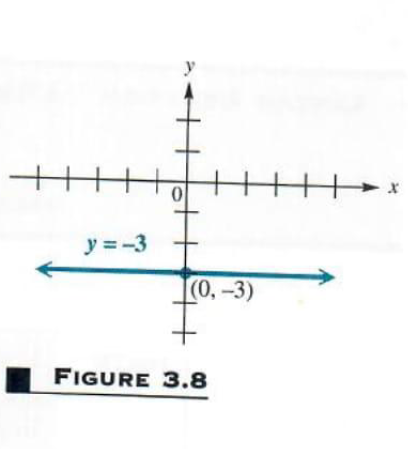 Here, since x always equals -3, the value of x can never be 0, and the graph has no y-intercept. Using reasoning similar to that of part (a), we find that this graph is parallel to the y-axis, as shown in Figure 3.9. The domain of this relation is {-3}, while the range is (-inf,inf), 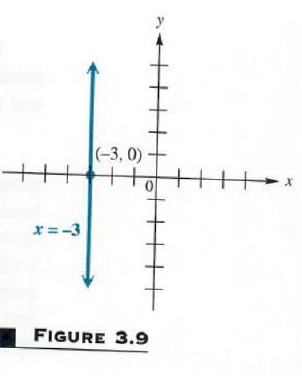 Example 3 GRAPHING A LINE THROUGH THE ORIGIN

Find the intercepts. If x=0, then

Letting y=0 leads to the same ordered pair,0=0. The graph of this relation has just one intercept—at the origin. Find another point by choosing a different value for x (or y). Choosing x=5 gives
4(5)-5y=0 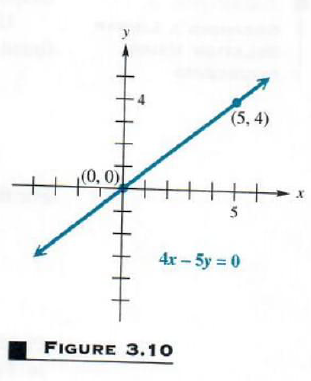 SLOPE An important characteristic of a straight line is its slope, a numerical measure of the steepness of the line. (Geometrically, this may be interpreted as the ratio of rise to run.) To find this measure, start with the line through the two distinct points (x_1,y_1) and (x_2,y_2), as shown in Figure 3.11 , where (x_1!=x_2).The difference
(x_2-y_1) 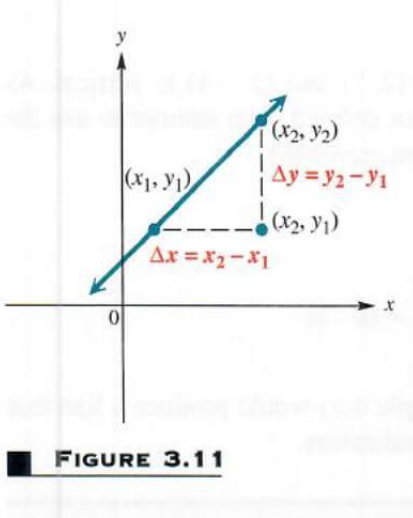 is called the change in x and denoted by {Delta}(x) (read “delta x’), where {Delta} is the Greek letter delta. In the same way, the change in y can be written

CAUTION When using the slope formula, be sure that it is applied correctly. It makes no difference which point is (x_1,y_1) or (x_2,y_2); however, it is important to be consistent. Start with the x- and y-value of one point (either one) and subtract the corresponding values of the other point.

The slope of a line can be found only if the line is nonvertical. This guarantees that (x_2!=x_1), so that the denominator (x_2-x_1)!=0. It is not possible to define the slope of a vertical line.

The slope of a vertical line is undefined.

Find the slope of the line through each of the following pairs of points.

A sketch would show that the line through (2, 7) and (2, -4) is vertical. As mentioned above, the slope of a vertical line is not defined. (An attempt to use the
definition of slope here would produce a zero denominator.)

Drawing a graph through the points in Example 4(c) would produce a line that is horizontal, which suggests the following generalization.

The slope of a horizontal line is 0. 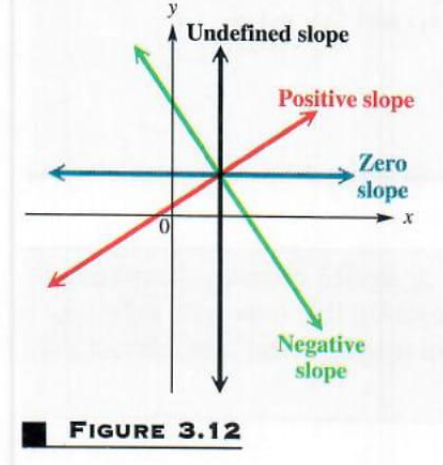 Example 5 GRAPHING A LINE USING A POINT AND THE SLOPE

This gives a second point, (2,0), which can then be used to complete the graph.

Because -5/3=5/(-3), another point could be obtained by starting at (-1,5)and moving 5 units up and 3 units to the left. We would reach a different second point, but the line would be the same. 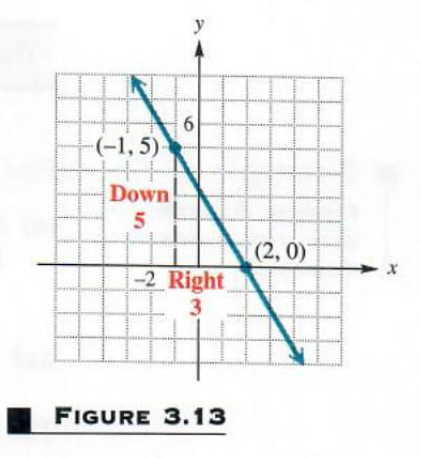 EQUATIONS OF A LINE Since equations can define relations, we now consider methods of finding equations of linear relations. Figure 3.14 shows the line passing through the fixed point (x_1,y_1) and having slope m. (Assuming that the
line has a slope guarantees that it is not vertical.) Let (x,y) be any other point on the line. By the definition of slope, the slope of the line is
(y-y_1)/(x-x_1)
Since the slope of the line is m,
(y-y_1)/(x-x_1)=m
Multiplying both sides by x-x_1 gives
y-y_1=m(x-x_1) 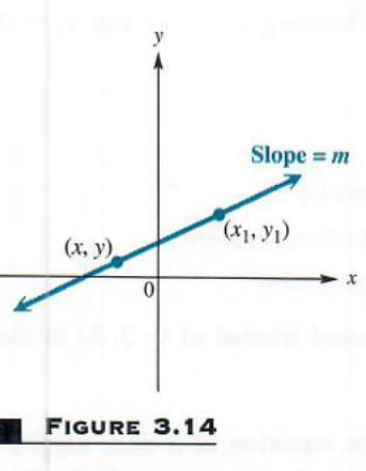 This result, called the point-slope form of the equation of a line, identifies points on a given line: a point (x,y) lies on the line through (x_1,y_1) with slope m if and only if
y-y_1=m(x-x_1)

POINT-SLOPE FORM The line with slope m passing through the point (x_1,y_1) has an equation

the point-slope form of the equation of a line.

SLOPE-INTERCEPT FORM The line with slope m and y-intercept b has an equation
y=mx+b
the slope-intercept form of the equation of a line.

Example 8 USING THE SLOPE-INTERCEPT FORM TO GRAPH A LINE

Find the slope and y-intercept of 3x-y=2 Graph the line using this information. 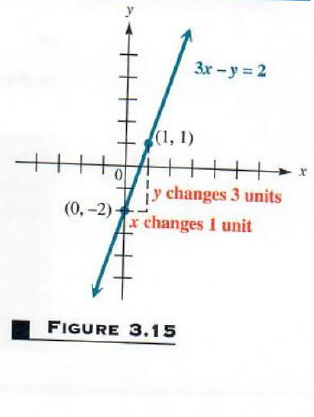 In the preceding discussion, it was assumed that the given line had a slope. The only lines having undefined slope are vertical lines. The vertical line through the point (a, b) passes through all the points of the form (a, y) , for any value of y. This fact determines the equation of a vertical line.

EQUATION OF A VERTICAL LINE An equation of the vertical line through the point (a, b) is x=a

The horizontal line through the point (a, b) passes through all points of the
form (x, b) , for any value of x. Therefore, the equation of a horizontal line involves only the variable y.

EQUATION OF A HORIZONTAL LINE An equation of the horizontal line through the point (a, b) is y=b.

For example, the horizontal line through (1,-3) has the equation y=-3. See Figure 3.8 for the graph of this equation. The equation of the x-axis is y=0.

PARALLEL. AND PERPENDICULAR LINES  Slopes can be used to decide whether or not two lines are parallel. Since two parallel lines are equally “steep,” they should have the same slope. Also, two distinct lines with the same “steepness” are parallel. The following result summarizes this discussion.

PARALLEL LINES Two distinct non vertical lines are parallel if and only if they have the same slope.

USING THE SLOPE RELATIONSHIPS FOR PARALLEL AND PERPENDICULAR

Find the equation of the line that passes through the point (3,5) and satisfies the given condition.

Since it is given that the point (3,5) is on the line, we need only find the slope to use the point-slope form. Find the slope by writing the equation of the given line in slope-intercept form. (That is, solve for y.)
2x+5y=4

Ax + By = C for real numbers A, B, and C. As mentioned earlier, the equation Ax + By = C  is the standard form of the equation of a line. The various forms of linear equations are listed below.

The equation is t=1/4c+37. By substituting the number of chirps per minute into this equation, the temperature t can be approximated.